Jennifer is facing homelessness with her two young boys because she wouldn’t move into the same area as the family of her violently abusive ex-husband. Take action (below) to tell Barnet Council that protecting your family from the threat of violence should not leave you at risk of homelessness! 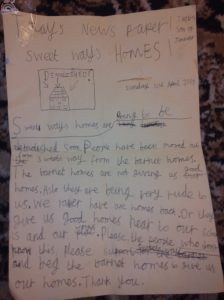 A letter by one of Jennifer’s sons.

When Jennifer and her two sons, recently evicted from Sweets Way, were offered accommodation in the same post code as her violent ex-husband’s sister, she asked Barnet Homes to review the offer. The thought of crossing paths with him was too much. She couldn’t live with that possibility.

Barnet Homes, however, operate a single offer policy, which means that if you don’t accept one offer of ‘suitable’ housing, you can be discharged from their housing list for two years. Which is exactly what they did to Jennifer and her sons.

She appealed the decision, but had it turned down again, and received an extensive letter from Barnet last week which told her the only recourse she had left was to go to the courts, or present herself and her children to Shelter or another homelessness charity.

Even after having been initially moved to Waltham Forest, nearly 10 miles from Sweets Way, her work, and the boys’ school, Barnet Council have informed Jennifer that she will need to vacate her temporary accommodation by the 2nd of June. But like so many others, she has not been able to find anywhere to rent privately within her budget.

Barnet Homes dismissed Jennifer’s concerns about seeing her abusive ex-husband because his more recent threats had ‘only’ been via Facebook and email. As a result, they claim there is no reason to worry about her or her children’s safety! (“…the only threat ]since August 2013] you have received from them as been in form of e-mails and Facebook, these are threats that are not related to areas as they are online threats and can be experienced anywhere.”) However, Local government guidance on dealing with homelessness and domestic violence states unequivocally: “there must be no risk of domestic violence (actual or threatened) in the other district [where a family is to be moved]…” This criteria has clearly not been satisfied, even by Barnet Homes’ own admission.

This is totally unacceptable, a neglect of the Council’s duty to Jennifer’s children and an insult to every family that has experienced domestic violence.

Can you take any of the actions below to support Jennifer and hold Barnet to account?

Jennifer is not alone in all of this. We are standing together with her and we will do whatever is needed to ensure a decent home for her family. It is exactly Barnet’s dismissive treatment of the issue of domestic violence that allows it to remain the epidemic that it is.

We all have a right to a home that is free from the fear of violence.

Here are the contact details for Richard Cornelius and Theresa Villiers, and a template letter you can adapt and send them. (Be sure to mention if you are from their constituency, as they have an obligation to respond to you then).

I am writing in regards to Jennifer and her two sons, formerly of the Sweets Way estate.

“A high standard of proof of actual [domestic] violence in the past should not be imposed. The threshold [for suitable accommodation] is that there must be:

As elected representatives for Jennifer’s local area, you have a legal duty to provide her and her children with suitable accommodation where she can feel safe from both actual and threatened violence. Barnet Homes’ decision to discharge duties towards her and her kids will leave them homeless, because they chose to avoid the potential risk of abuse.

As you know, according to the Housing Act 1996 and the Homelessness Act 2002, the priority should always be for a client to be and to feel safe. Current treatment from the local authority has failed to meet this criteria.

I ask that you urgently review Barnet Homes’ decision and rehouse Jennifer and her children with suitable local accommodation, free from the kinds of threats described above.

I also expect that any future cases will be treated with the same care outlined above.

Juliet and her youngest son

This Wednesday, Juliet and her four children have been told to leave the emergency accommodation they were moved to in Potters Bar, Hertfordshire, following their eviction from Sweets Way. What makes this truly awful is that Barnet Homes have declared that they have no responsibility to help the family, leaving them with nowhere to go in London that Juliet’s salary can afford.

***** If you can’t make it in person, can you send an email or make a phone call to Councillor Richard Cornelius (Leader of Barnet Council) and MP Theresa Villiers, telling them that this is an unacceptable way to treat their constituents? (Details and template letter below)

Even though Juliet works in Whetstone and her eldest daughter is studying for her GCSEs, Barnet Council have essentially told her to get out of Barnet.

In a 4-page letter last week, Barnet Homes told Juliet that because she had turned down a property that would have been entirely unliveable for her family, she was making herself ‘intentionally homeless.’ In the letter, they sent four links to properties available to people claiming housing benefit. When Juliet checked the links there was not a single property available between them!

Juliet will be meeting with the Interim Chief Executive of Barnet Homes on Wednesday afternoon and we want to have a strong presence outside when she does, so they know that the public spotlight is on them the day before the election.

If Barnet can destroy 150 homes that people have been living in (they approved Annington’s development plans), then they can also find local accommodation in the borough that those families can afford, within reach of their work and school commitments!

So join us on Wednesday, 1:45pm and send an email to Cllr. Cornelius and MP Villiers, telling them that Barnet Homes’ treatment of Juliet’s family is completely unacceptable. They need to feel the pressure the day before the election, so let’s make sure we are flooding their inboxes with our collective anger at the ways they are treating poor and working class constituents!

Here are the contact details for Richard Cornelius and Theresa Villiers, and a template letter you can adapt and send them. (Be sure to mention if you are from their constituency, as they have an obligation to respond to you then).

RE: One of the 150 evicted households of Sweets Way

The disarray, distress, disruption, turmoil, trauma, and sheer terror wreaked upon the residents of the Sweets way Estate is set to reach a peak this week with another household facing imminent homelessness.

I’m sure you will agree that it is not acceptable for Barnet Homes / Barnet Council to allow the eviction of Juliet and her four children from their temporary accommodation to face certain street homelessness. It is probable that this would result in Juliet losing her job, and her children being taken into the care system.

We ask that you urgently:

We realise that you no longer need to seek to win the votes of 150 households that have recently been evicted from your ward/constituency, but we hope that you appreciate that these people belong in their community and should not be treated in the appalling manner in which they have.

Yesterday, all of the remaining families on the Sweets Way estate were given notice from Annington Properties Limited, that their individual cases – despite later-scheduled individual eviction dates – had been transferred from County Court to High Court Bailiffs, effective immediately!

Though we are going through every legal channel we know to challenge this abusive move by Annington, at this point, HIGH COURT BAILIFFS – WHO IT IS ILLEGAL TO RESIST – WILL ARRIVE AT THE REMAINING SWEETS WAY FAMILIES HOMES ON A MORNING THIS WEEK, WITHOUT NOTICE!

This is truly a horrible move by Annington, placing the order on a Friday when, legally speaking, it is nearly impossible to challenge either the lack-of-hearing made, or that all cases were treated as one, despite differences in individual situations, and expected eviction dates.

We need a few things from all of those who have supported the campaign and who oppose the social cleansing happening across London:

You can reach Annington on the following numbers:

If you leave them a message, be sure to say:

We hope you’ll try to make the trek to Barnet this week and do what you can to help stop Annington and to support all of us here at Sweets Way to fight social cleansing!