We have news that gives Mostafa and his family a little hope. On Friday Ash, Mostafa’s son, obtained a letter from his GP as evidence that Mostafa needs a fully-wheelchair accessible home. Will Barnet Homes accept it? 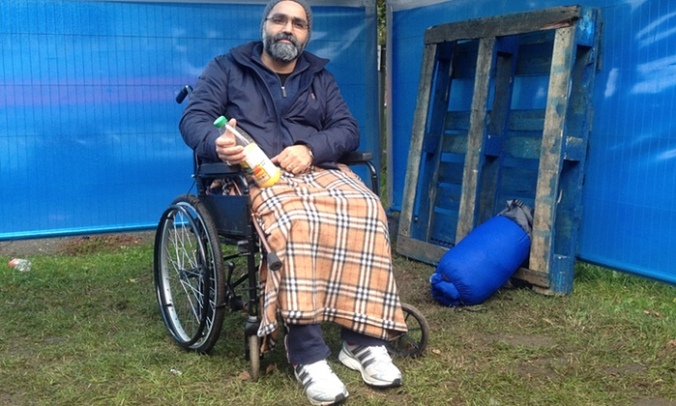 Will you help us and stand by Mostafa on Monday?

When: This Monday @ 12:30pm
Where: Outside Barnet Homes (1255 High Road, N20)
What: To deliver the latest petition names, and ask Barnet Homes to respect the medical opinions of Mostafa’s GP (and other health professionals), and make him an offer of a truly accessible property.

Here’s a rundown of what has happened in the last few days:

On Wednesday Mostafa was evicted from his current house on the Sweets Way estate. He was now homeless, and the urgency of the situation had multiplied.

But after delivering the 33,000 petition signatures gathered in his name to Barnet Homes, he received an email reiterating the same arguments he had heard countless times over: that based on the information they had, he was not in need of a fully-wheelchair accessible home. But it also included the following passage: “We will be happy to revisit this decision if we are able to receive further information from the consultant at the hospital you attend.”

Having approached the hospital for this evidence but knowing that hospital bureaucracy would mean waiting a long time for it, we thought about what might be the next-best-option. Mostafa has been seeing the same GP for nearly four years, since the accident that left him with his current disability. As the longest-standing health professional in Mostafa’s life, his GP seemed like a strong candidate to explain to Barnet Homes exactly the extent to which Mostafa can and cannot mobilise without a wheelchair.

Upon calling Barnet Homes on Mostafa’s behalf to confirm their receipt of the new evidence, we were immediately told: ‘this is not the evidence we asked for.’ We explained that it was the best that was available in the urgency of the current situation, and was in fact likely a stronger indicator of Mostafa’s medical needs, than that of a less-frequently-visited hospital consultant.

We were told that next week the new evidence would be reviewed and eventually promised that Mostafa’s current offer wouldn’t be withdrawn before Monday, but they would not commit to holding the property until a decision had been made by Barnet’s medical assessors.

Meanwhile, a family friend has agreed to let Mostafa stay with him over the weekend. This has only been possible because the friend’s son has agreed to stay with others ‘til Monday, leaving Mostafa his room. We need to be sure that on Monday, Barnet Homes looks rationally at the evidence before them, accepts the scale of Mostafa’s housing needs and either agrees to make the currently-offered home fully-wheelchair accessible, or to make him a new offer that is.

Since the petition delivery, thousands more of you that have added your names to the tally. We want to go back on Monday to re-submit the petition and ask that Barnet Homes make Mostafa a truly-suitable offer. They asked for more evidence, and Mostafa has provided it to the best of his ability; let’s hope this leads to a decision that works for all involved.

Join us at 12:30pm on Monday (Sept 28) outside Barnet Homes (1255 High Road, N20) to deliver the latest petition names, and ask them to respect the medical opinions of Mostafa’s GP (and other health professionals), and make him an offer of a truly accessible property.

One thought on “Will Barnet Homes make Mostafa an accessible offer now?”