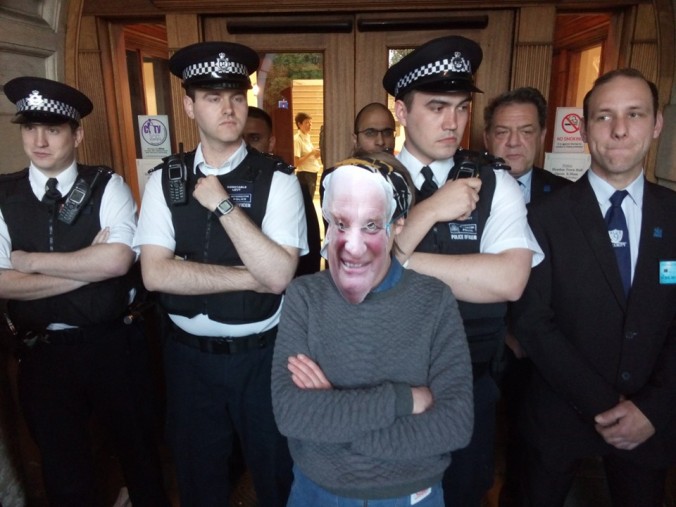 Not even Richard Cornelius, Leader of Barnet Council was allowed into the AGM!

Tonight was an absolute disgrace at Hendon Town Hall! Barnet Council refused to let any of us from Sweets Way Resists or Our West Hendon into a *public* meeting where decisions about our lives were being made, even though we had 200,000 combined signatures on our petitions to present to them!

But that didn’t stop us from shouting loud enough that we could be heard in the meetings over the Mayor of Barnet, who was busy lying to the Council, telling them that residents were being let inside, when Barnet Council staff had told us in no uncertain terms that none of us would be allowed into the Town Hall tonight!

In truth, the line of cops and private security did occasionally part and make way for people to enter… As long as they were in formal attire! The rest of us proles were pushed and shoved by privately hired heavies for trying to take part in our local democratic process!

We stuck it out though! And we were there at the end when people in formal wear began to trickle-out from the post-AGM reception. We made sure they knew we were weren’t going away!

Tonight made the sorry-state of democracy in Barnet clear for all to see: even with the strength of 200,000 petition signatures, privatised security guards, backed by the force of the Met, kept families from taking part in a discussion with the council that sold off or approved the demolition of our homes.

But democracy isn’t really about what a bunch of posh folks in suits get up to behind police lines. It is about what we do to shape our lives, in the places we live. So we’ll get on with democracy at Sweets Way and West Hendon. If Barnet Council don’t want to let us into their meetings, we will just get on with our own and make the decisions together that will allow us to live the lives we deserve. We’ll see how long it takes before they come knocking at our doors… 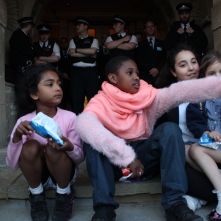 22 thoughts on “Democracy in Barnet”